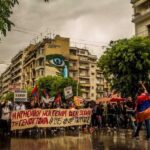 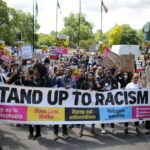 LONDON, ENGLAND - JUNE 13: Anti-racism protesters attend a Black Lives Matter demonstration on June 13, 2020 in London, England. A number of anti-racism protesters have gathered in London despite the cancellation of the official event due to fears of clashes with far-right groups. Following a social media post by the far-right activist known as Tommy Robinson, members of far-right linked groups have gathered around statues in London, which have been targeted by Black Lives Matter protesters for their links to racism and the slave trade. (Photo by Luke Dray/Getty Images)